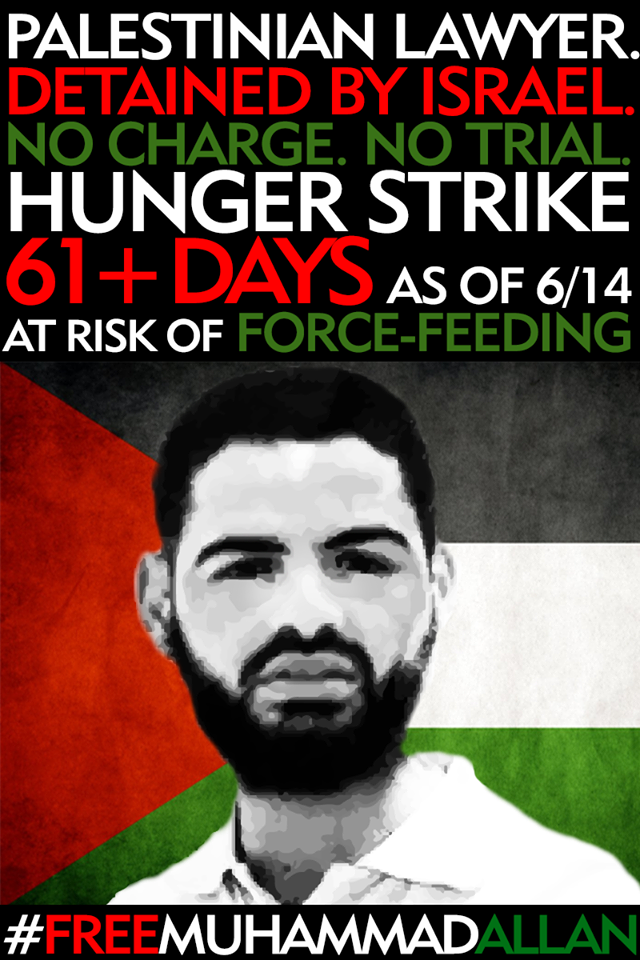 Allan is now in the 65th day of his hunger strike

The Israeli Supreme Court has ruled that hunger striking Palestinian prisoner,  31 year-old Mohammed Allan, will be released from administrative detention…but only if medical tests show that he’s suffered “irreversible” damage as a result of his 65-day hunger strike.  Apparently, a healthy Allan was a grave national security threat.  While a near-dead Allan poses no such threat.  While the Court has done the decent, humane thing, it erased any good will it might’ve generated by compelling Allan had to prove that his ordeal had caused damage to his body and mind so severe that it supported freeing him.

If he recovers and shows no sign of permanent damage, he could be rearrested and forced to serve the remainder of his term under administrative detention.  Further, he could be rearrested at any time by authorities under a new order.  Such is the caprice of the Israeli legal system regarding security offenses.  Under administrative detention, a victim need not be charged with a crime.  And such detentions may be extended for six month periods indefinitely.  That is why prisoners have begun to resort to hunger strikes.  Killing themselves seems to be the only message that moves the hardened Pharaonic hearts of Israel’s security services.

Israel was placed in this “awkward” position by a ruling from the national medical association refusing to participate in force-feeding him, which had been the prison service’s plan.  After no doctor would agree, it had to let the hunger strike run its course.  It is a pleasant surprise that the Israeli security police couldn’t mange to find a professional willing to perform such a ghoulish procedure.  Keep in mind, that a number of countries including the U.S. do permit force-feeding of hunger strikers.

This is a cold, brutal judicial decision in line with a string of such judgments offered by this Court since a hardline majority took over in the past several years.  Lest any apologists continue prattling about the liberal views and support for human rights offered by the highest judicial body as a counter to the racism of the legislative branch, the days of Aharon Barak are long past.  Nor are we likely to see such a person on the court in the future.

That doesn’t mean the extreme right in Israel is any less angry at this Court.  In fact, one minister said last week the Court should be “bulldozed.”  Apparently, having a court that is obeisant to the right-wing policies of the government as this one is, isn’t enough.  They want a Court that opens its sessions with the Likud anthem and swears allegiance to Rabbis Ginsburgh and Lior.

NOTE: I recently published a long piece for Mint Press News on the fate of Gaza civil engineer, Dirar Abu Sisi, railroaded by the Israeli justice system into a 21-year prison sentence.  I will now be publishing weekly for Mint Press.  My author page is here, where you may find all my articles.  A new piece of mine, calling for holding Israel financially culpable for acts of terror by its citizens, will be published there either today or tomorrow.